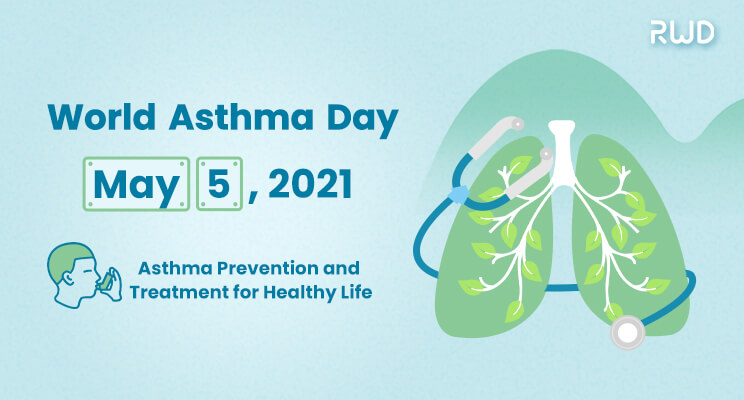 World Asthma Day is an annual event organized by the Global Initiative for Asthma to improve asthma awareness and care around the world. World Asthma Day takes place on the first Tuesday of May.

This May 4th marks the 23rd World Asthma Day. During the special period of the COVID-19 pandemic, RWD pays attention to respiratory health, hoping to enhance the public understanding of respiratory diseases by sharing practical information from the literature.

Asthma is clinically classified according to the frequency of symptoms, forced expiratory volume in one second (FEV1), and peak expiratory flow rate. Asthma may also be classified as atopic (extrinsic) or non-atopic (intrinsic), based on whether symptoms are precipitated by allergens (atopic) or not (non-atopic).

Allergic asthma is the most common type, which is a chronic and non-communicable disease, affecting both children and adults. It has a high incidence of 4.3% among adults, with about 334 million people suffering from this disease globally. Asthma imposes a huge economic burden on patients and public health. Glucocorticoid (GC) has a strong anti-inflammatory effect and is the most effective anti-inflammatory drug for the treatment of asthma. Glucocorticoid is widely used as an inhalation drug to reduce mortality of patients. Although glucocorticoid has been proven to have effective anti-inflammatory and immunosuppressive effects, its drug resistance and other adverse reactions limit the long-term use.

A good news is that the therapeutic effects of Dihydroartemisinin (DHA) on asthma are partially realized, according to some researches. The US patent (2012/0015922) shows that artemisinin derivatives play a key role in the treatment of asthma and chronic obstructive pulmonary disease (COPD). Dihydroartemisinin (DHA), a semisynthetic derivative of artemisinin extracted from herb Artemisia apiacea, has been proven to reduce the inflammation of mice with experimental autoimmune encephalomyelitis by weakening the mutual regulation of mTOR pathway on Th cells and Treg cells. Another literature shows that DHA inhibited airway inflammation of OVA-induced allergic asthma mouse model by preventing the phosphorylation level of extracellular signal-regulated kinase (ERK) and p38 mitogen-activated protein kinase, and also inhibited the activity of NF-kB. However, the exact mechanism of the anti-inflammatory effect of DHA in mouse models is still unknown.

Research fellows from the Respiratory Medicine Department of Children’s Hospital of Soochow University published a paper titled Dihydroartemisinin Ameliorated Ovalbumin-Induced Asthma in Mice via Regulation of MiR-183C in Medical Science Monitor. They found that DHA can attenuate the pathological response of OVA-induced allergic asthma in mouse model, and the above therapeutic effect of DHA on asthma is partially achieved by regulating miR-183C and IL-6/Stat3 pathways.

Through building a BALB/C mouse model of asthma sensitized by OVA, it shows that compared with the mice in control group, the weight of the mice in model group decreased significantly, and the mice with asthma recovered their weight significantly after DHA treatment. OVA inhalation also significantly increased the lung/body weight ratio of mice, and the above index also decreased after DHA treatment. In addition, the researchers found that the mice treated with DHA had a higher survival rate than those in model group. The researchers then investigated the effects of DHA on asthmatic inflammatory cell infiltration and pulmonary function. The results show that DHA significantly reduced the number of neutrophils, lymphocytes, monocytes, eosinophils, and basophils, as well as these immune cells, as compared with the model group. At the same time, compared with the model group, the airway resistance (RI) of the mice subject to DHA treatment was significantly decreased, and the dynamic compliance (Cdyn) was significantly increased. The laboratory results above suggest that DHA administration could alleviate the severity of OVA-induced asthma, reduce inflammation, and improve pulmonary function.

The researchers preliminarily investigated the effect of DHA on asthma inflammation through lung tissue sections and found that: mice with OVA-induced asthma had a large number of inflammatory cell infiltration in multiple sites, with increased mucus secretion; while DHA administration reduced peribronchial and perivascular inflammation and significantly reduced PAS-positive areas. It has been reported in the literature that Th17 cells are associated with asthma inflammation, and Th17 cells, together with their secreted cytokines, are involved in numerous biological processes and play an important role in immune response and local inflammation. Therefore, the author further explored the effect of DHA on inflammatory cytokine expression and whether Th17 cells were involved. The experimental results showed that inflammatory cytokines were significantly increased in BALF of OVA-sensitized asthmatic mice, but the above increase was reversed after DHA treatment. Among them, the significantly increased concentration of cytokine IL-17 indicates that Th17 cells play a special role in this process. After DHA treatment, the proportion of Th17 cells decreased significantly. These results suggest that DHA may reduce the inflammation caused by asthma via reducing Th17 cell response.

It has been reported that different differentiation induction conditions may be responsible for the difference in pathogenicity of Th17 cells. IL-6 stimulation can promote the pathological effect of Th17 cells, and STAT3 is an important transcription factor that promotes the production of Th17 cytokines. Therefore, the researchers have further explored and evaluated the effects of DHA on STAT3 phosphorylation and IL-6 protein expression, as well as the effects of DHA on cytokine expression at transcription level. Finally, they detected the expression of cytokines in BALF with ELISA. The results suggest that DHA may inhibit the response of Th17 cells through IL6/STAT3 pathway.

Recent studies have shown that the miR-183C and Foxo1 pathways interact with the IL-6 signaling pathway. Foxo1 is the main regulator of Th17 cell differentiation and activation. It has been reported that miR-183C targets all Foxo transcription factors in Th17 and Treg cell differentiation.  There was a pattern of synergistic expression between miR-183, miR-96 and miR-182. The authors conducted further research, and results showed that the transcript of miR-183-5p, miR-96-5p, and miR-182-5p were significantly increased in OVA-induced asthmatic mice, but this phenomenon was reversed after DHA administration. In addition, the transcript levels of Rorc and ilr1 were enhanced in OVA-sensitized asthmatic mice, while DHA treatment similarly inhibited this increase, and the expression levels of the transcription factor Foxo1 were significantly reduced at both the transcriptional and translational levels, and the expression of this transcription factor was enhanced after DHA treatment. The results of luciferase analysis showed that miR-183C inhibited the transcription of Foxo1, and DHA significantly abolished this function, but miR-183C had no effect on the mutated Foxo13 ‘-UTR. In conclusion, Foxo1 is involved in the functional regulation of miR-183C on Th17-mediated immune responses.

DHA inhibits the expression of miR-183C and Foxo1 pathways

In summary, DHA administration can attenuate inflammation and improve pulmonary function in OVA-induced allergic asthma mice. This reversal ability of DHA may depend on the regulation of miR-183C expression. Such ability may subsequently affect the transcription of Foxo1. (R415 VentStar Small Animal Ventilator produced by RWD assisted in the above pulmonary function evaluation)