This guide consists of 4 chapters that are arranged according to different phases of the fiber photometry journey.

Chapter 1 introduces the basic knowledge of the fiber photometry system.

Chapter 2 explains the working principle, advantages, and shows the steps of setting up the relevant experiment.

Chapter 3 elaborates the functions of different fiber photometry models and provides successful case studies to show the range of applications.

Chapter 4 gives recommendations on choosing the most efficient fiber photometry accessories to improve the experiment in practice.

In case you know little about fiber photometry…

Fiber photometry system is an optical imaging method that enables researchers to detect the activity of large neuronal populations in freely-moving animals for a long period of time, which helps to explore the correlation between neuronal activity and animal behaviors.

Fiber photometry is an optical method that is based on the principle of measuring the light emitted from fluorescent molecules via time-correlated single-photon counting (TCSPC)- based fiber optics. From this principle, we know that the realization of this experiment requires probe tools that can express fluorescence in the tissue, as well as a set of equipment that can transmit fluorescence and detect it.

Then we look at the fluorescence tools first. Currently the most commonly used fluorescence tools are divided into calcium indicators, neurotransmitter indicators, voltage indicators and so on. Because there are many kinds of animal models for experimental applications, and also we need to study specific brain regions or even specific kinds of cells, gene editing techniques have been widely used for probe development.

The more widely used GECIs are: GCaMP, Pericams, Cameleons, TN-XXL and Twitch, among which GCaMP6, GCaMP7 are now widely used in in vivo calcium imaging studies due to its superior sensitivity. The following is a summary of the types of the common GECIs. 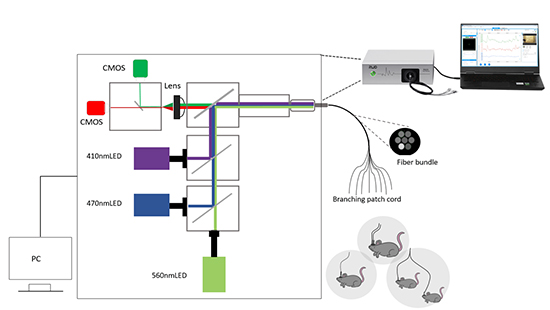 For instance, advantages of Fiber photometry.

The study of the nervous system of awake and freely moving animals is a crucial issue in contemporary neuroscience research. By detecting calcium signals associated with neuronal activity, we are able to better understand complex neural circuits. In recent years, technological developments including two-photon microscopy, single-photon microscopy, and fiber photometry have allowed us to perform real-time detection of changes in calcium signals in animals. The application of these techniques requires engineered fluorescent proteins.

In the past, most in vivo calcium imaging was done under two-photon microscopy. Two-photon microscopy is a fluorescence imaging technique in which two beams of coherent laser light are focused through the eyepiece of a microscope to a point defined by a point spread function, similar to confocal microscopy that selectively excites fluorescent-like molecules. In two-photon microscopy, the excitation light wavelength is near 700-1000 nm, close to the infrared spectrum. This is the first advantage of in vivo two-photon imaging: longer wavelengths of light scatter less in the tissue and penetrate to greater depths. The second is the good resolution that allows visualization not only of individual neurons but also of calcium activity at the ends of axons of subcellular structures.

In this article, we will show some real experimental examples that will help inspire your experimental design.

After mastering the first two chapters, you will be proficient in recording signals from free-behaving animals using a fiber photometry system. In this article, we will show some real experimental examples that will help inspire your experimental design.

The fiber photometry system used in the experimental case is as follows.

Chapter 4: How to choose fiber photometry accessories for obtaining the most efficient signal transmission?

In this article, we will describe the detailed information about fiber photometry accessories. You will understand how to choose the right one.

1. How to choose the core diameter and numerical aperture (NA) of the consumables?

2. Can the ceramic ferrule for optogenetics experiments be used for fiber photometry?

3. Are there any special requirements for the materials of optical fiber?

4. Can fiber photometry experiments be carried out with an Optical rotary joint?

5. How to choose optical fiber consumables for multi-channel recording?

6. Will the experimental effect be better if the core diameter and numerical aperture (NA) are larger?

7. How to avoid the interference of ambient light to the greatest extent possible in experiments?