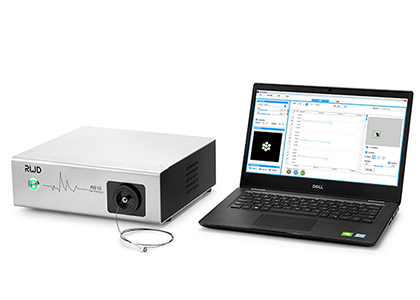 The fiber photometry system records changes in the intensity of fluorescence of neurons in specific brain regions to characterize changes in the activity of neuronal populations. The fiber photometry system can detect population neurons in free-moving animals for long periods of time, which is helpful to explore the correlation between neuron activity and animal behavior.

R810 Dual Color Multichannel Fiber Photometry System has two excitation light sources (410nm and 470nm). The 410 nm can be used to reflect the background noise signal, thus ensuring the acquisition of true fluorescence data. The system can acquire data from no less than 9 channels simultaneously and is suitable for simultaneous recording of multiple brain regions or multiple animals.